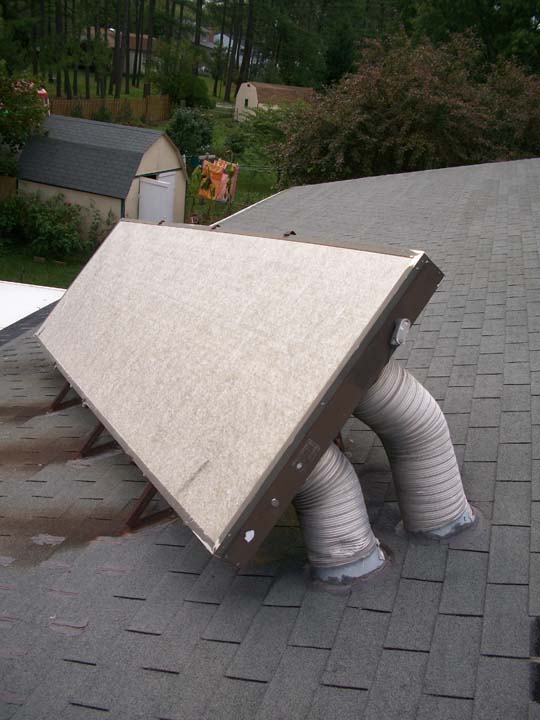 We were called by a client who had a solar air heating system that had been in operation since the 80’s.  They had enjoyed the “free heat” for so many years, but after 30 years, the system needed some maintenance.  The homeowner said that after-tax credits, they had paid only a couple hundred dollars for the installed system back in the early 80’s.  They went on and on about how the system had done such a great job supplementing the heat in their home.  They, of course, had a conventional heating system as well, however, they said that on a sunny and moderately cool day, that the solar air heaters did most of the job.  What a neglected technology this is.  Contact us if you are interested in exploring the solar air-heating option!

So, after some troubleshooting on the solar-air heating job, we came to realize that the system only needed some minor electrical work to get it up and running.  This particular system utilized two blowers, one for each 4X12 panel.  Temperature sensors within the panels communicated with the blower motors and told them when to kick on.  The wiring between the sensor and blower motor needed replacing and it was recommended that the homeowners looked into replacing the glazing that covered the solar air heaters.  They were still operating quite nicely, but replacing the glazing could boost the system’s output and eventually help pay for the low-cost fix that was needed to get the system running.

There are systems identical to this one that were installed throughout the 80’s, yet there are currently few customers interested in solar air heating.  Numerous companies currently manufacture these collectors and those interested in supplementing their heating should consider this option.  Our company is currently installing a system in Christiansburg, Virginia utilizing a passive (no blower) design.  In this scenario, the solar air heater is mounted vertically on the south side of the home to optimize wintertime solar heat gains.  We will be logging data on this installation with Hobo data loggers for the temperature inside the collectors, ambient temperatures, and insolation.  We hope to gain an idea of what types of temperatures our panels will reach during the coldest, but sunniest, winter days.