With the arctic blast that has fallen upon the Richmond area this winter, there are many homeowners with “the frozen water pipe nightmare” on their hands.
Here’s how it goes:
You wake in the morning after a blistery cold night with single digit temperatures and you head off to work, maybe not knowing that some of the water piping below your home is frozen. When you return home you notice a hissing sound coming from your crawl space. Then you go the rarely accessed crawl space door, and upon entering you see water spraying from cracked plumbing pipes. When you went to work, the pipes were frozen, but now that the sunshine warmed things a little- the frozen and cracked pipes are thawed and gushing. What a lousy way to start an evening. And what do you do when this happens?
First, you need to locate your main water line cutoff. Do you know where this is in your home? Every minute counts, as the water has the ability to damage insulation, structural wood under your home, and even the hardwood flooring above under the worst circumstances. Don’t wait until it happens, get into that dirty crawl space and know where that water cutoff is. What most people do next is the common sense approach of calling the plumber. But he generally only comes out and gives you a hefty bill for repairing the piping. So you’re left in a situation where it can happen again.
Here’s another scenario. You’re starting your day by taking a shower after a blistery cold night- and the water backs up into your shower. It was working fine yesterday, right? Well over the course of the single digit night, the frigid cold air has frozen the plumbing trap under the shower. If you have cantilevered framing areas where the second story of your home extends a couple feet over the first floor, then this might happen to you. Plumbing traps in these locations are notorious for freezing up when proper insulation does not exist in this cavity. Take a look at the following pictures and you will get the jist.
Here’s what the hidden frozen area of this house looked like before taking down the soffit 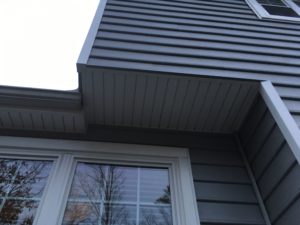 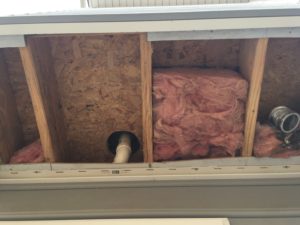 Our recommendation is to encapsulate the plumbing trap with spray foam and seal the bypass around it. Sealing the gaping hole in the wood around the pipe will also make your bathroom more comfortable by disallowing the movement of cold air into the area beneath your shower. And then install fiberglass insulation in areas where it was missing. Lastly, we like to use poly-iso board as a thermal barrier to cap everything off before reinstalling the vinyl soffit. This layer of high R-value insulation board will make a HUGE difference, as opposed to just insulating the area with fiberglass batts. 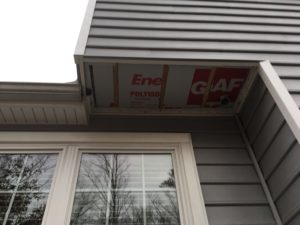 And we also caulk and spray foam all penetrations around the insulation board before piecing everything back together. So you will know who to call when you find yourself in this situation.
As for crawlspace issues in freezing weather, we are capable of fixing the plumbing leaks and then taking actions that PREVENT IT FROM HAPPENING AGAIN. Don’t pay the plumber to fix the pipes and just throw some pipe insulation over them hoping it doesn’t happen again. Your pipe freezing issues may have been caused by any number of other circumstances. These include inoperable crawl space vents that have been left open, a drafty uninsulated crawl space door that is missing weatherstripping, Bypasses around the perimeter of the crawl space that allows the cold air to enter, etc. We can address these issues for you at a reasonable cost and prevent you from ever having the “frozen pipe nightmare” again.